Primavera Farm, Winner of the 2018 Cup of Excellence and First Runner-Up in 2019 | Atlantica

Primavera Farm, Winner of the 2018 Cup of Excellence and First Runner-Up in 2019

The Cup of Excellence (COE) is the world’s premier competition for assessing the quality of specialty coffees. The Geisha coffee from Primavera Farm, located in the Minas Gerais municipality of Angelândia, was recognized in 2019 for the second consecutive year.

In 2018, the farm took the title of champion and set a new record for the most expensive coffee in Brazil. At this year’s competition, Geisha coffee ascended to the podium once again as first runner-up at the COE.

Being on the podium for two consecutive years in the main coffee quality contest in the world shows the consistency in quality of Primavera Farm.

Being consistent is one of the most important things for a specialty coffee farm that aims to be recognized internationally. It is important to have traceability at each stage and to follow a quality standard in all processes.

The region’s mild climate, altitude, and relief bestow special qualities upon Primavera’s Farm coffee. But it is the consistency in post-harvest and drying processes,  rigorous standards, and people management that make Primavera an excellent farm that produces high-quality coffees with unparalleled flavors.

Next, learn more about the Cup of Excellence and the participation of Montesanto Tavares Group, the parent company of Atlantica Coffee and Primavera Farm.

Primavera Farm, first runner-up at the 2019 Cup of Excellence!

Our performance at the competition is the result of Montesanto Tavares Group’ increased dedication to its crops and focus on quality processes, producing special, consistent and exceptional coffees.

Leonardo Montesanto Tavares, director of GMT Farms, expressed his appreciation with the following words:  “This award demonstrates that hard work is worth it, that dedication and consistency are important, and that we are professionals at what we do. Beyond the financial aspects, the most important part [of this prize] is its ability to show the world that northern Minas Gerais also produces excellent coffee. This award is for everyone at Primavera Farm.”

In 2019, the Cup of Excellence underwent a notable change. For the first time, it began accepting samples of natural coffees and peeled/pulped cherries in a special category, refining the search for excellent beans produced in Brazil.

“We came in second at the biggest competition of specialty coffees from Brazil. We did not repeat our 2018 victory, but we are very happy because we were recognized as a model farm in the worldwide production of quality coffees. Congratulations to everyone on the Primavera Farm-Angelândia -MG team,” commented Ricardo Tavares, Leonardo’s father and director of  Montesanto Tavares Group (GMT).

Coffee beans from Primavera’s “Geisha” variety earned 93.89 points at the 2018 Cup of Excellence, winning the competition for the first time.

According to a column in Forbes magazine, connoisseurs refer to the beverage as “black gold,” thus granting Primavera Farm the renown of producing one of the best coffees in the world.

“High-scoring beans like these are showing the world the true quality of Brazilian coffee. This is our job: to make our property stand out when it comes to quality coffee,” adds producer Leonardo Tavares. 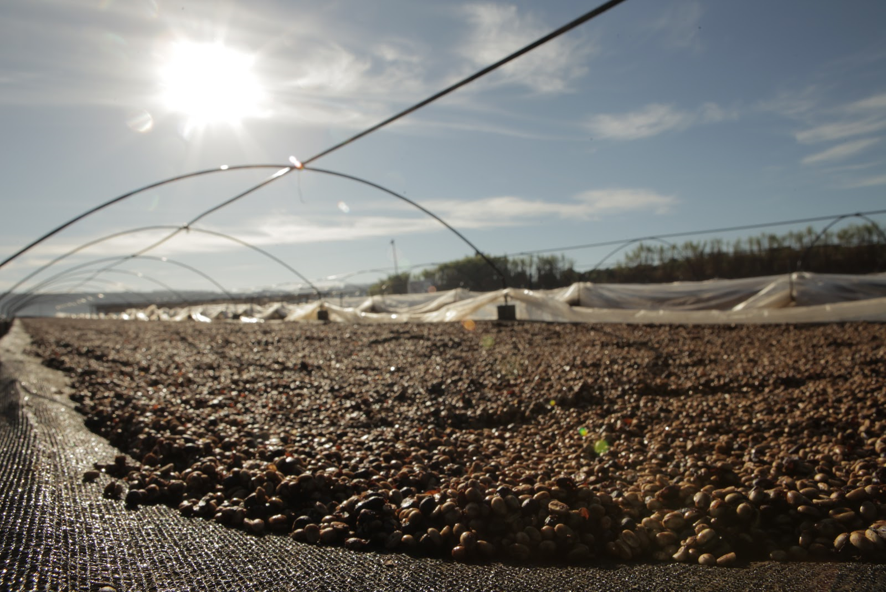 Geisha variety beans are highly complex and flavorful. The main characteristic of Geisha Primavera is its floral aroma, but its sweetness, acidity and velvety body also give personality to the drink.  In the cup, it is possible to taste jasmine, bergamot, and tropical and wild fruits.

Primavera’s Farm Geisha variety is carefully produced with attention to the smallest of details.  From its selective harvesting to its drying on a suspended terrace and separate storage in microlots, Primavera’s Geisha coffee is treated with special care.

Women pick the fruit by hand when the cherry reaches its most ripe stage.  The coffee is processed via the natural method, placed in fermentation tanks, and taken to suspended terraces, without rest. After drying for 20 days, the coffee is stored in the husk to rest until the competition. 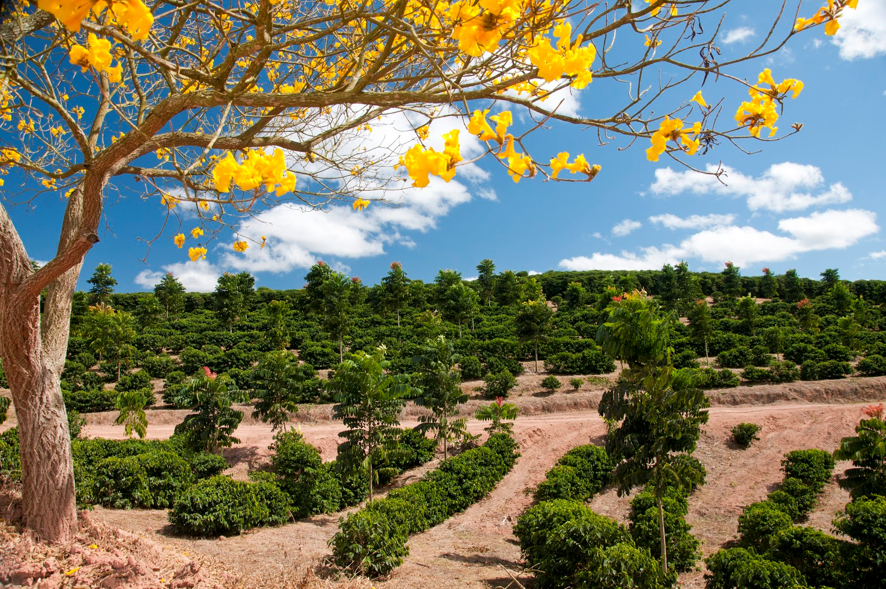 Primavera Farm is located in the municipality of Angelândia, in Minas Gerais. It lies in a biome transition zone of Chapada de Minas in which the land and vegetation have characteristics of both the Atlantic Forest and the Cerrado.

The farm’s elevation, between 950 and 1050 meters above sea level, as well as the climate,  with average temperatures ranging from 20-24° C and annual precipitation between 1,000 and 1,300 mm, promote the cultivation of specialty coffee.

The mountainous Chapada de Minas region in which the farm is located has vegetation characteristic of the Cerrado and Atlantic Forest regions, conferring an exuberant, varied biodiversity.

With high relative humidity, weather similar to that of Central America, and loamy soil, Primavera’s Farm climate alternates between dry periods and intense rains. The coffee is cultivated on plateaus and rolling hills; streams and rivers run throughout the entire farm.

Mahogany trees are planted alongside the coffee, resulting in shade-grown beans that ripen more slowly and, ultimately, a sweet drink with special characteristics.

When ripe, the coffee is mechanically harvested and processed at a quality station with the utmost care. The farm has a demonstrated history of replicating standards of quality year after year, aided by a well-structured, highly-experienced team.

Watch a video of the farm: https://www.youtube.com/watch?v=optyNkLYf8E 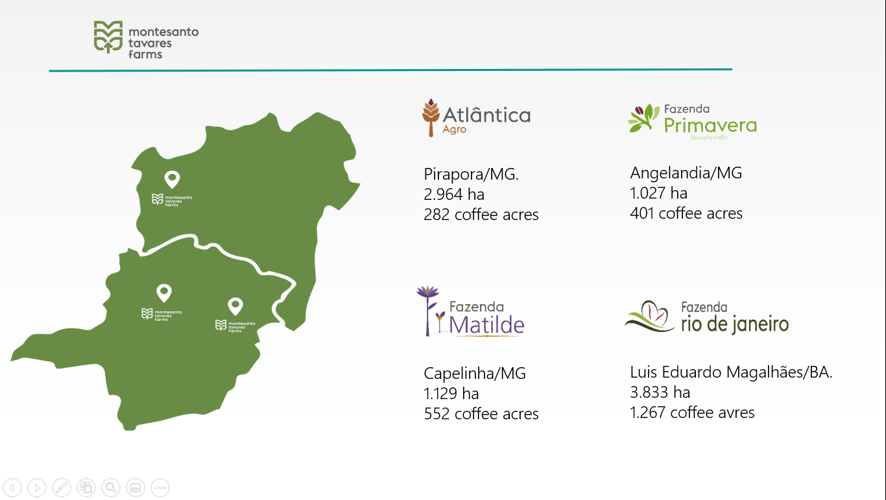 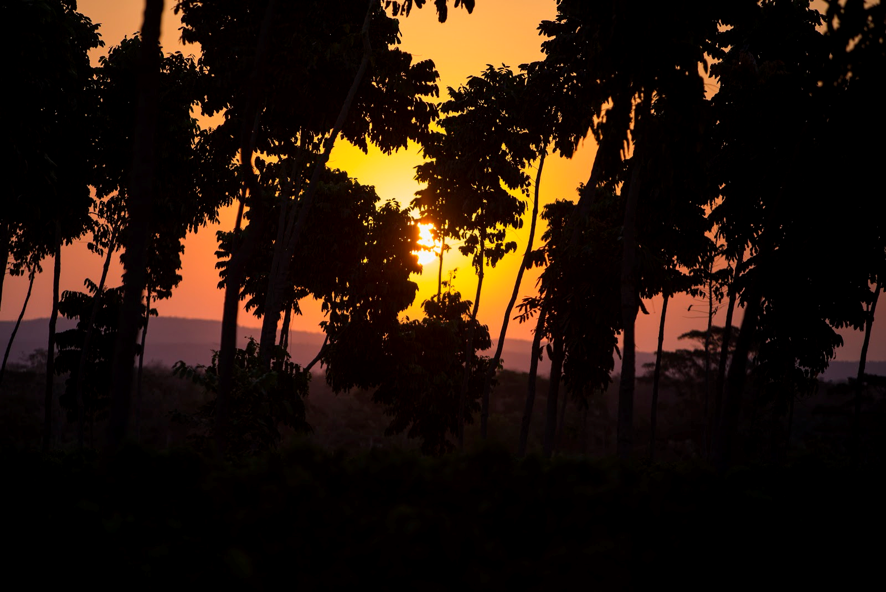 One of Primavera’S Farm greatest honors was our recognition as the 3rd Most Sustainable Farm in Brazil at the 3rd Sustainable Farm Awards held by Globo Rural magazine. Globo Rural is one of the most prominent Brazilian agribusiness publications and is a part of the Globo Group. Learn more at: https://www.youtube.com/watch?v=QAoBQDsN6QE&t=13s

Montesanto Tavares Group also runs social programs in each of the coffee producing regions in which it is active. The social program “Projeto Café solidário” serves children and the elderly by offering dance, theater, fashion, and art classes, in addition to providing financial support to a retirement home in the region.

Near Primavera Farm, the program “Promoting Life and Health in the Countryside” provides medical services to nearly 100 local families and farmworkers. The program conducts workshops on topics including nutrition, vaccinations, disease control, preventative campaigns, and the health of women and seniors.